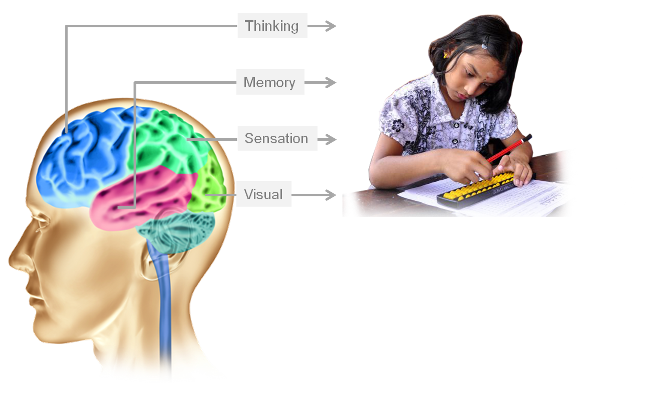 Abacus is an age old tool popular only in China and Japan on those days. From time immemorial, the Chinese and Japanese were using it to do mental arithmetic calculations. Abacus is said to be the China’s fifth great invention. But now it has become popular in most of the developed countries. Abacus is a tool with beads and rods each having specific value. Children have to use both their hands to do the sums. Our brain has two hemispheres. The right hemisphere controls the left side motor action of our body and in the same way the left hemisphere controls the right side motor action. The left portion of our brain is responsible for our logical, abstract, language and analytical skills. Our right brain is responsible for reasoning, creativity, emotion and music. Memory and concentration will be taken care of by both the hemispheres. Human beings normally engage only one side of their body for all motor actions. Either they are left handed persons or right handed persons.- Because of that, only one part of the brain is constantly working and the other portion lies dormant or idle. By giving work to both the hands the entire part of the brain gets activated and by that we can exploit the full potential of the brain.

The abacus also called a counting frame, is a calculating tool that was in use in Europe, China and Russia, centuries before the adoption of the written Hindu–Arabic numeral system and is still used by merchants, traders and clerks in some parts of Eastern Europe, Russia, China and Africa. Today, abaci are often constructed as a bamboo frame with beads sliding on wires, but originally they were beans or stones moved in grooves in sand or on tablets of wood, stone, or metal.